Hello to all. Even though ' Spring has sprung ' I am finding it a little chilly today. The sun has been out but for some reason it has now disappeared behind the clouds. Always hope for better tomorrow!

For the past couple of days, about seven of us got together and had a great time card making out at Doreen's home - I managed to get ten cards made so was feeling quite pleased with myself. As is usual there was plenty of food, talking, laughing etc and a good weekend was had by all. Thanks so much Doreen for putting up with us.

Today I am showcasing a couple of cards I have made - firstly one for an order then the second one has been made for our grand daughter, Millie Rose. 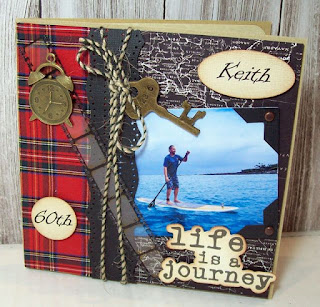 I was given this tartan material to use, as he is Scottish and his hobby is paddle boarding. Do hope Keith enjoyed receiving his card. I managed to find the picture on Google. 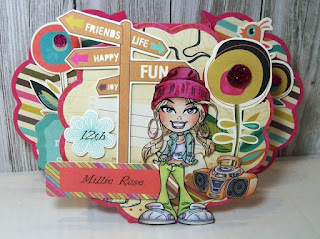 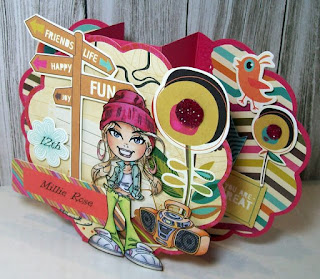 I am not sure what you would call this shaped card but I do use it quite a bit. The girl is an image from the Kenny collection  and other than that, I have used Kaisercraft's Hopscotch Collection which is an older range. She seemed to be pleased with it when she phoned up. Millie hasn't been so well lately, as she has had glandular fever. Do hope she responds to some relaxation over the school holidays.

As we are expecting visitors shortly, I had better go and prepare myself.

Happy crafting and may you all know God's blessing.

Just a very hurried post this morning ladies, so as to keep in touch. I seem to have a fair bit on my plate just now, still catching up on my weeks out of commission. It is great that we enjoy what we are doing though, isn't it!

I will add three cards which I have made, two male ones, which I must admit I find harder to do and a pretty one. Enjoy! 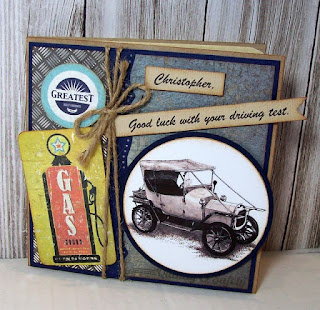 This card was made especially for a young gentleman who was preparing for his driving test. Grandma was heading overseas, for a visit, and decided a card would boost him up. I haven't heard whether Christopher was successful or not, but I do hope so. I have used  Garage Days papers from Kaisercraft, the image is from Pinterest and it is a 5 1/4" square card. 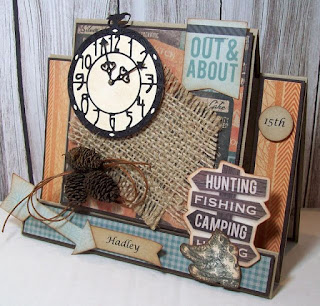 We have a grandson who just loves hunting, so hence we have a hunting card using the collection from Kaisercraft, called Outdoor Trail. Cherry Lyn Step Card Die has been used to cut the card. I do get so much use out of this die and end up with a different look every time. Money well spent here, I reckon! 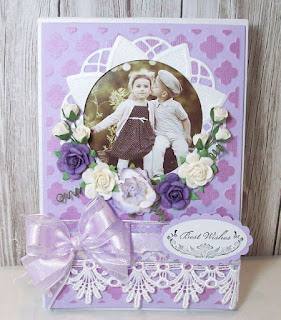 Back into my comfort zone! This card was made using one of Kaisercraft's new die and embossing folders. It cut out the circle while embossing the trellis effect, which, while the die was still on I sponged it with pearlescent purple ink. The effect is super.The frame round the circle was cut using Marianne Creatables Die LR0129. Again, Pinterest  was where I found the image.

Well ladies, a very happy day to you all, whatever you are doing, thanks so much for stopping by. Hopefully we will be in touch again next week, so until them many blessings.

Good morning all. Monday morning again - I just don't know where the days are going! Christmas before we know it.

Today I would like to share two cards that I have made, for friends, using the stunning Couture Creations Papers, called Hearts Ease. I fell in love with this collection as soon as I saw it and am not disappointed with how the cards turned out. Love to know your thoughts ladies. 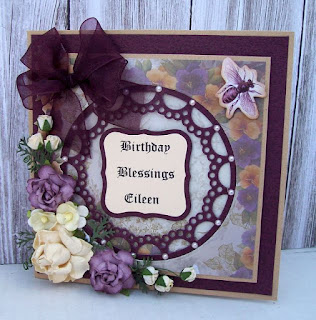 Eileen's card was a 5 1/4" square card and I used a Marianne Craftables Die, CR1239. This is one of my all time favourite dies. The papers are very vintagey with pansies as the flowers. I love it. Eileen specially liked the bug! 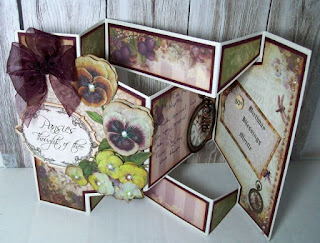 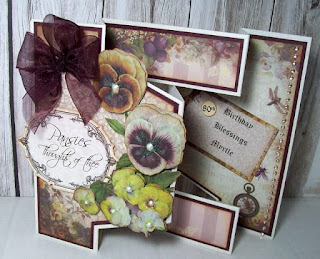 A tri-fold easel card for Myrtle, cut slightly different. I have cut the pansies from the papers and have 3'D them for the front of the card. I was pleased with the effect, as was Myrtle.

All today ladies, must carry on with the good work!

Happy crafting to all and may you know God's blessing.

Good morning to all my special blog friends. It is so lovely to know you are all there and seem to enjoy these posts, as indicated by the emails comments etc. Thank you so much for taking the time to check them out. I do appreciate you all.

Am feeling much better now thankfully - maybe it's because Spring has sprung!! We have a lovely day today, weatherwise, hence some cleaning has occurred at our house. Not before time mind you. I need some more energy now, though.

Today, I am sharing a couple of birthday cards which I have made for my lovely friends. 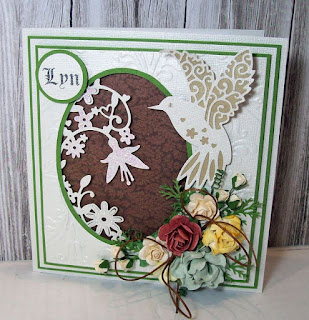 Lyn's card is a 5 1/4" square card and I have used the stunning Tattered Lace Die, Hummingbird Tapestry D491. The idea for this card came out of the Tattered Lace Magazine which is a very good buy, as you get a free die with each book and plenty of ideas, plus some extra papers. Was thrilled with how it turned out, as I hope Lyn was. Artfull Crafts have these books available and I feel sure you would not be disappointed if you bought one. 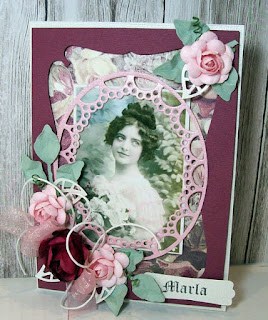 For Marla's card I have used an Xcut Nesting Die, XCU503045 for the main cut, then Marianne Craftables Die, CR1241 for the scalloped frame. The image was found on Pinterest, where one can spend many hours searching and never be disappointed! Pink and wine is always a lovely colour combination.

Well ladies, happy crafting to you all and many blessings,

Betsy Clark
I live in beautiful Geraldine, New Zealand, retiring here from the Catlins about 2006. I have lived with my very tolerant and encouraging husband for over 50 years, and we have a strong Christian faith. We have a grown family of four and ten lovely grandchildren. Many forms of craft have been my passion for years, but patchworking and card-making have taken precedence.